What the heck are Moles anyway…

Moles are small, burrowing mammals that also happen to be world-class diggers. In fact, if there was a digging event in the Olympics, I wouldn’t bet against them. Unfortunately, it is their gold-medal digging ability that secures a spot for them on the world-wide pest list. If there’s a list to strive to be on, this is not it.

Moles are like the rockstars of the underworld, or at least the underground world. They dig crazy intricate tunnels that can be both shallow and deep and are quite extensive. They live a subterranean (a very long word meaning under the surface of the earth) lifestyle and rarely come up to see the light of day. And, even if they did bust through that surface, they wouldn’t be seeing much anyway. Moles are not blind but would probably be considered legally blind by any licensed mole ophthalmologist out there. Their eyes are poorly developed, they are color blind, and it is likely they can only see light and movement. This was most likely another diagnosis given by those super-specialized mole opthalmologists.

Good news for the mole is that what they lack in sight, they more than make up for with their sense of touch. While rocking a tube-shaped body that is covered in short, thick, velvety fur, moles across this globe are armed with long, extremely sensitive snouts. They have short powerful limbs with larger front feet to accommodate the Freddy Kreuger-like claws they use for digging through the dirt.

Like the gophers in the movie Caddyshack, moles like what they find under a good golf course, or a park, or your lawn. A healthy, thriving, bright green lawn that is full of insects and worms is the perfect storm for a mole. Food and lodging all in one place. Your lawn is basically a mole’s paradise.

Think you might have a mole problem? There are a few telltale signs that there is likely a mole taking up residence right below your feet. First and foremost, if you see molehills that are a few inches high and wide popping up on your lawn, well, they are called Molehills for a reason. Raised areas or “tunnels” making their way across your lawn is another good indicator, and plant or grass damage or death might also mean you have an unwanted guest.

How To Get Rid of Moles…

Natural predators of moles include snakes, skunks, foxes, weasels, hawks, owls, and domestic cats and dogs. If you have a mole problem but don’t happen to have (or want!) any of these mole removers around, HowToPest.com has everything you will need to remedy your whole-y mole-y issue. 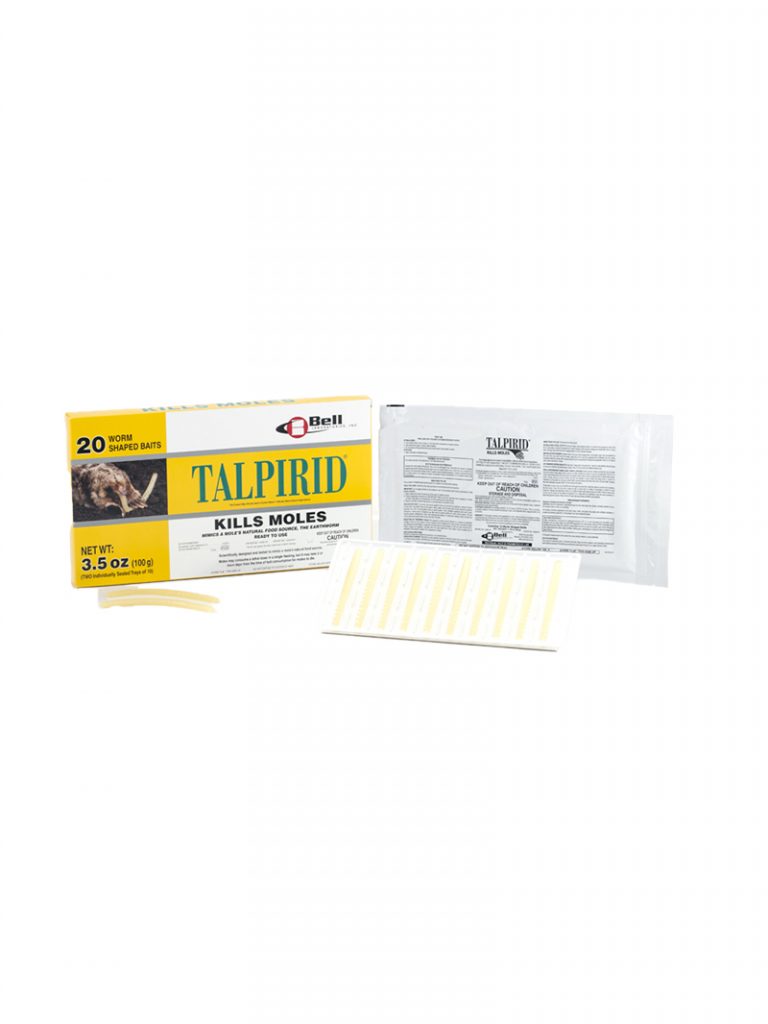 ** Please Note**: The worms may lose their shape or melt during shipping due to higher temperatures during warmer weather months.  This does not affect their efficacy; the packaged worms can be placed in the refrigerator to re-solidify then used as directed on the label.

How do you know if you have moles and not gophers?  Well, the most obvious difference is the mole tunnels.  Mole tunnels are partially above ground so you can see the tunnels from mound to mound whereas the gopher tunnels are completely underground and all you see is the mounds.  Now that you know you have moles, it’s time to get rid of them!  Talpirid Mole Bait has been our pro-choice for many years and is super effective in the fight against moles!

$49.97
Shop now
Tagged How To Get Rid of MolesHow To Kill MolesMoles